Vienna- based NFT platform Loob offers an ad-free, all-in-one solution for the creation, promotion and distribution of Digital Assets.

You are here:
Announcements 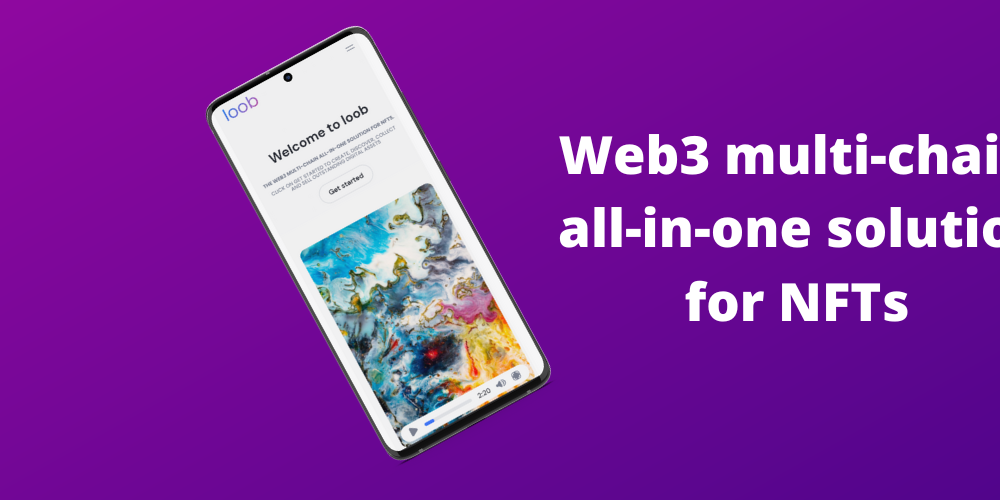 Non-fungible tokens (NFTs) are becoming increasingly popular. Artists, entrepreneurs, and even teenagers make six figures or million-dollar amounts with NFTs. For example, a twelve-year-old in suburban London made £290,000 from the proceeds of an 8-bit representation of a whale. The inventor of the Internet, Tim Berners-Lee, tokenized his original program code for the World Wide Web as an NFT, which was worth over $5 million at Sothebys the other day. Twitter – founder Jack Dorsay was able to collect $2.9 million for the NFT certificate of his first tweet. The most successful trade of an NFT to date came from the initially less famous artist Beeple, who was able to raise around 69.3 million dollars for his artwork “Everydays – the first 5000 days”.

NFTs are digital assets with unique identification codes and metadata recorded in a blockchain ledger that represent the ownership and authenticity of an associated unique tangible or intangible asset. The concept behind NFTs is to create scarcity in the flood of seemingly endless supply of virtual items. Accordingly, NFTs bring the promise of creating a “digital original” that is unique and uniquely attributable to its respective owner. The resulting possibilities are being hyped up, especially in the digital art industry: while in the “real world” there is always a unique original of a work, like the painting the artist created with his own hands, in the digital world there has been no equivalent in the sense of a “digital original” until now.

Ed Prinz and Roman Mühlberger, together with six other experts, have previously founded the non-profit organization DLT Austria to make distributed leger technologies, such as blockchain technology, better known, more accessible and more widely usable. They are developing a software platform that will deliver a user-friendly and easy-to-use all-in-one solution for the creation, promotion and distribution of NFTs. An intuitive user interface of the platform’s Creation House provides maximum scope for creating Digital Assets, uploading and editing digital images, as well as using advanced image editing functions with Artificial Intelligence (AI) technology. AI has gained popularity not least in the creative field with technologies such as in Neural Style Transfer or Generative Adversarial Networks (GANs). For example, the AI-based portrait “Edmont de Belamy” changed hands at auction for $432,000. On the platform Loob, an artwork can be modified with many AI-based filters with just a few mouse clicks. The digital artworks created in this way can then also be transferred and pinned down as Non-Fungible Tokens (NFT) on the blockchain with a simple mouse click. Thus, the created NFT is a kind of digital proof of authenticity or ownership, which is securely recorded in the blockchain as the property of the user. Moreover, the Digital Asset can then be displayed to other users via the Art House. In addition, the assets can be traded easily and conveniently via the Auction House, which integrated into the platform. The integrated platform transfers ownership to the buyer once an auction has been performed successfully.

However, the two blockchain experts do not want to limit themselves to digital art alone. Thus, almost any physically or digitally existing unique object can be easily tokenized via the blockchain and made available for trade through the platform. “We are creating a comprehensive platform that on the one hand allows people to develop creatively and on the other hand to create and trade their digital NFT certificate without any technical know-how. We put a big focus on usability,” says co-founder Roman Mühlberger.

“The NFT certificates permanently stored on the blockchain ensure that the entire ownership history is available at any time and from any location. Users who wish to prove ownership of a so-called digital asset (tokenized digital artwork) with a digital signature can do so by performing a signature transaction on the Ethereum network. Since NFT certificate holders only need their user credentials, the NFT proof of ownership technology eliminates the need to store numerous documents or items in the real world to prove ownership,” said Co-Founder Ed Prinz.

In addition, the social factor should not be neglected – mutual exchange via chats and a forum will also be made possible via the integrated social network Party House. This is intended to promote contact between users with different interests, which should not be limited exclusively to the trade of intellectual property. For example, as with Instagram, current NFTs from the platform can be displayed to interested users, which can then also be shared and traded. By using standards on the Ethereum blockchain, the content can also be stored and used outside the platform.

The most frequently asked question to us is, “Can you copy NFTs?”
We usually answer it this way: subject to existing IP rights, anyone can theoretically copy a digital file as many times as they want; including the art information contained in an NFT. However, NFTs are designed to provide something that is protected from replication: ownership of the work. Essentially, the owner of an NFT owns the original piece of hex values signed by the creator. While others can freely copy the raw data, they cannot claim ownership.

Both founders of Loob met in 2018 at a leading consulting firm, where they worked together on architecture and implementation on pilot blockchain projects, among other things. Ed Prinz has extensive IT experience spanning decades. Roman Mühlberger has already written academic papers with internationally renowned universities on topics around Blockchain during his studies, which were presented at an academic conference. Both founders studied computer science in Vienna and always wanted to use their expertise to make modern, cutting-edge technologies easily accessible to the people. “The biggest appeal of working with blockchain is the variety of possibilities that arise based on the combination of AI & blockchain,” both co-founders of Loob say. “Incidentally, Loob is an acronym and stands for “LOCKED OUTSTANDING OBJECT BINARY” – a platform that aims to reach a mass audience, Mühlberger and Prinz further explain. Their ultimate goal is to make a highly complicated subject matter fit for everyday use.

We have opened our beta phase. loob is now available online.
February 22, 2022